Environment.Vote Climate Policy Scorecard is a community tool which helps Australian citizens understand all party policy, focused on the single biggest issue of our time, our planet. The intent of the Environment.Vote Climate Policy Scorecard is to help voters make informed choices around party positions aligned with their own personal values and promote informed, safe, and simplified preference voting choice guidance. This scorecard is an evolving community resource, based on the publicly published climate stance of all political parties in Australia. In the 2019 Australian Federal Election this process resulted in many parties updating their published environmental policies to a higher standard throughout the fortnight before the election 👍🌏 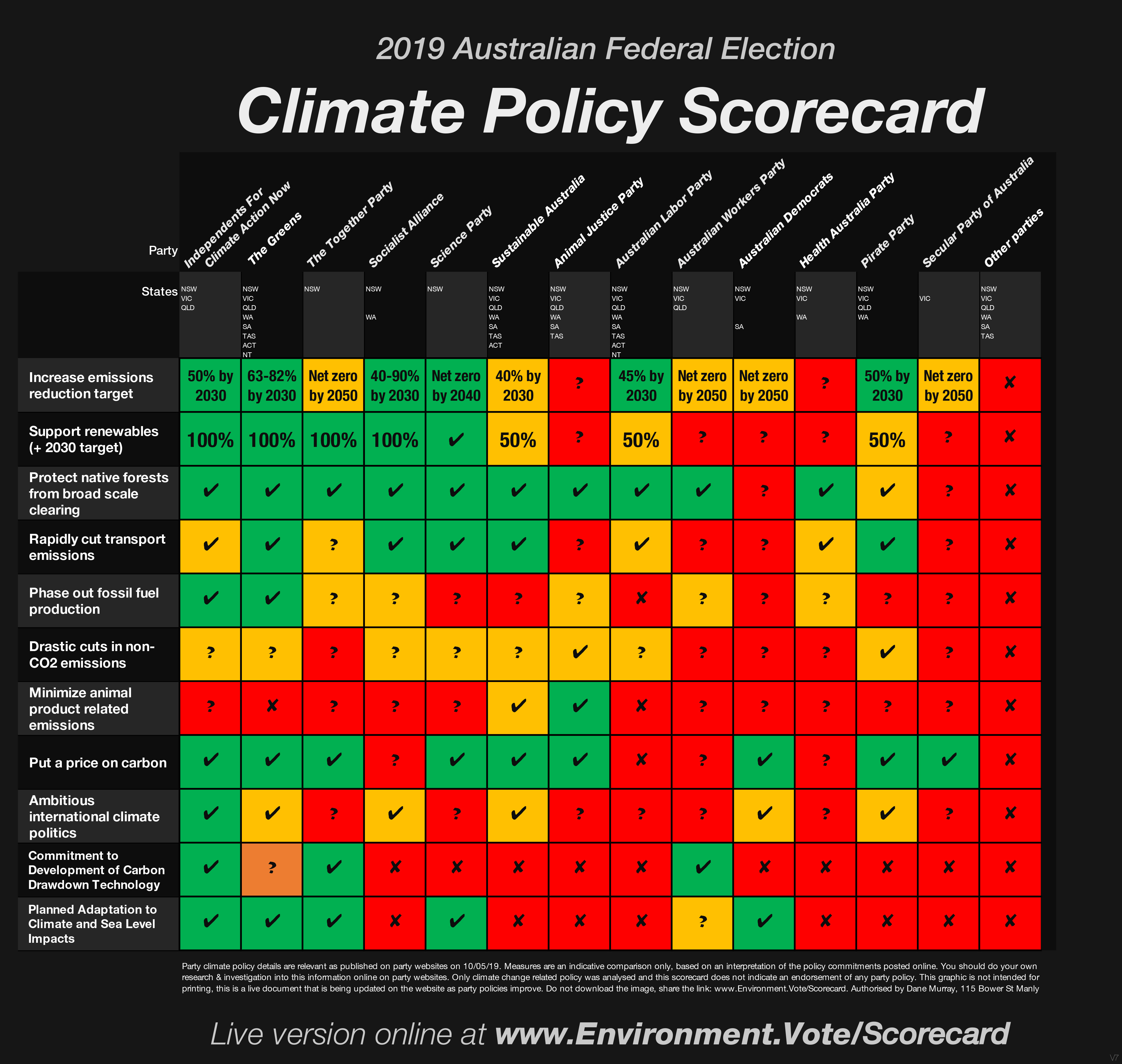 There is a consensus among the scientific community that the climate is changing and that human created greenhouse gas emissions are the most significant cause. There remains debate among scientists and economists about the best ways to address the climate emergency. The categories outlined below and reflected in the scorecard above, are based on political issues in Australia current to 2019 as well as recommended policy responses outlined by the International Panel on Climate Change. Not all people agree that all categories identified are necessary. You should consider the descriptions below when you are considering each element of the Climate Policy Scorecard and its relevance to your personal vote. [LAST UPDATE 10 MAY 2019]

The IPCC's special report on the impacts of global warming of 1.5 °C (https://www.ipcc.ch/sr15/) says we must cut emissions by at least 45% by 2030 and achieve zero emissions by 2050 to limit warming to 1.5C. On the Scorecard, a green box indicates the party has a stated policy objective to meet this target, a yellow box indicates a lesser increase in Australia's emissions reduction target, a red box indicates no specific target mentioned on the party website.

The energy sector is the single biggest contributor to Australia's greenhouse gas emissions. Transitioning away from fossil fuel power generation to renewable energy is essential in order to reduce our economy-wide emissions to meet our international obligations under the Paris Agreement. The energy sector is where we can most easily reduce emissions and an area in which Australia is lagging behind many comparable countries. On the Scorecard, a green box indicates an ambitious commitment to the expansion of renewables (such as 100% by 2030), a yellow box indicates a lesser commitment and a red box indicates no specific commitment mentioned on the party website.

Our native forests play an important role in sequestering carbon pollution naturally. The broadscale clearing of remnant forests reduces natural sequestration and threatens many native species that call these forests home. On the Scorecard, a green box indicates the party has stated policies to protect remnant forests in Australia from broadscale clearing, a red box means it is not specifically mentioned on the party website.

Australia's inefficient transport sector is one of the biggest contributors to CO2 emissions in Australia. On the Scorecard, a green box indicates a commitment to introducing emissions standards, supporting the transition to EVs and substantially increasing federal funding to all states for public transport projects, a red box means it is not specifically mentioned on the party website.

The burning of fossil fuels is recognised as the single biggest contributor to emissions in Australia and across the globe. However, the fossil fuel industry is a significant employer and some regional economies are based around the industry. On the Scorecard, a green box indicates the party has stated policies to phase out fossil fuel mining, production, and use domestically and for export, and a commitment to stopping the Adani coal mine (which no longer has social licence among the Australian population). A red box means it is not specifically mentioned on the party website.

Drastic cuts in methane, refrigerants, black carbon and other short-lived climate pollutants are urgently needed globally and in many cases can be achieved cost-efficiently with regulation. However, this must be addressed internationally, not only domestically. On the Scorecard, a green box in this category would require a commitment to rapidly cut non-CO2 emissions both domestically and internationally, a red box means it is not specifically mentioned on the party website.

Studies estimate the impact of animal industries to be between 14% and 51% of global warming. Methane has a very rapid impact on the climate, and its short-term effects are underestimated when 100 models are being used. On the Scorecard a green box indicates broad support for a transition away from animal products through a broad range of measures, A yellow box indicates some form of support for plant-based diets, such as education on the environmental benefits and/or other benefits, a red box means it is not specifically mentioned on the party website.

Put a price on carbon

Putting a price on carbon is important. Carbon pricing seeks to address the economic problem that CO2 is what economists call a 'negative externality,' meaning the true costs (including the impacts on climate) aren't reflected in the price. As a consequence of not being priced, there is no market mechanism responsive to the costs of CO2 emitted. A carbon price is the base for emissions trading schemes that are established in many countries to manage and reduce carbon pollution. On the Scorecard a green box indicates a stated policy commitment to put a price on carbon pollution, a red box means it is not specifically mentioned on the party website.

IPCC states that under any scenario to limit warming to <2C we need to draw CO2 out of the atmosphere. This can be from both natural and technological processes. The technology to do this, on the scale required, does not currently exist so there is a need for research and development into this field. On the Scorecard, a green box indicates a mentioned commitment to the development of carbon drawdown technology, a red box means it is not specifically mentioned on the party website.

Regardless of our best mitigation efforts, a range of impacts are already locked into the climate system and are going to get more severe in the next decades – drought, heatwaves, extended fire season, intense storms/cyclones, floods and sea level rise. Australia needs to plan to adapt to this new climate reality. On the Scorecard, a green box indicates a plan for Australia's adaption to climate and sea level impacts, a red box indicates no plan shown on the party website.

This is an evolving document, the current version is based on an indicative interpretation of the policy commitments shown on public party websites on 10/05/19. You should do your own research as party policy is likely to change and throughout the course of releasing the Climate Policy Scorecard several parties have adjusted their policies to be more aligned with the single biggest issue. Here's a list of party climate policy links: www.Environment.Vote/Policies . The scorecard is designed to be updated, if you have any changes to make please use the links at the bottom of this page to paste the text from your party website into your party spreadsheet so our awesome volunteer team can update it. If you want to help develop the Scorecard pease sign up here: www.Environment.Vote/Volunteer .

The Climate Policy Scorecard is a volunteer run project by people passionate about improving Australia's climate policy, understanding of safe preferential voting and communicating it in a clear way. Thanks for your support and care for this project. To make a change to the scorecard please copy and paste the wording from a public party webpage into the Google Sheets in the links below. We'll update the scorecard daily. This is a collaborative community project. Thanks for participating! 👐🌏

See who else is joining: